The British adventurer and explorer Ernest Shackleton’s autograph, signature and signed letters are very popular and while scarce, are obtainable. Shackleton’s exploits in the Antarctic on his Endurance Expedition are legendary. They are regarded as the greatest adventure ever, requiring the most extraordinary clear thinking, skills, and understanding of human nature.

Shackleton’s expedition to cross Antarctica was caught by an early winter and all efforts to free his ship the Endurance were unsuccessful leaving everyone marooned on the sea ice off the coast of Antarctica. The ice slowly crushed his ship leaving the crew with the lifeboats and what they had salvaged from the ship. Eventually the ice began to break up and the ice they were living on became more and more unstable forcing them into their lifeboats in an attempt to get them to any land. They reached Elephant Island, a place no ship ever approached. After many months Shackleton accepted that if ships were still looking for them they would never look on Elephant Island. Shackleton then set out on the greatest feat of small boat handling and navigation ever accomplished. In a 23 foot long lifeboat he navigated 800 miles to the tiny speck of South Georgia Island, a whaling station, in the south Atlantic. He returned to Elephant Island to rescue his men and brought everyone back without the loss of a single life.

Ernest Shackleton’s signed letters are frequently written on the stationery of his different Antarctic expeditions and usually relate to fundraising.

Please browse our selection of Ernest Shackleton autographed memorabilia or you may search our entire inventory alphabetically, by name, or by category. 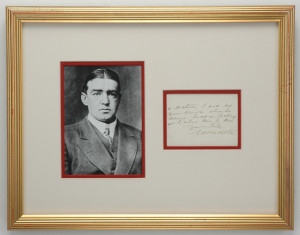