“SUNDRY AMUSEMENTS IN THE MINES”

Group of four illustrations on an oblong quarto sheet, entitled Sundry Amusements in the Mines. Lithographed and published by Britton & Rey, San Francisco. Each image measures 3 3/8 by 4 3/4 inches; the sheet measuring by 8 3/8 by10 3/4 inches.

The first image, A Sunday’s Amusements, shows two miners washing their ragged clothing in a stream; in the second scene, A Daily Pleasure, they prepare and cook their evening meal in a log cabin fireplace; the third picture shows the miners mending clothes and repairing boots over the title, Occupation for Rainy Days; A Pleasant Surprise depicts the miners’ questionable glee at finding a bear seeking refuge in their tent.

Joseph Britton, a Yorkshire Englishman, came to the United States as a boy, and lived in New York until he was twenty-four years old. With the discovery of gold in the West, he joined the California Gold Rush and went directly to the gold fields and prospected until he became discouraged and went to San Francisco, where he soon set up, in 1852, a lithography business with Jacques Joseph Rey. The Frenchman was born in Alsace and migrated to California in 1850. Harry T. Peters in California on Stone writes: “Three years later [Rey] married Britton’s sister, thus cementing a friendship and partnership which accounts for some of the most notable lithography done in California.” 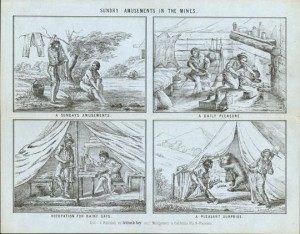