~All books are available on Amazon.~

279 pages
Published by the University of Oklahoma Press, 1995
Hundreds of illustrations and a lengthy bibliography

“The book discusses the reasons why collectors acquire these tangible links to the people they admire; the material available on the market; the people who are attracted to the field; where manuscripts are to be found; the detection of forgeries; ways in which the value of documents is determined; and the care and preservation of collections.

“Rendell also provides a mass of information of the type, availability, and rarity of autograph material for more than one thousand prominent personalities in various subject areas—American history, including an in-depth coverage of presidential material; English, French, and other European political and military history, including World War II; music, art, literature, and the performing arts; and other areas, including science, business, exploration, religion, law, and sports.

“Rendell’s comprehensive reference work, augmented by its lavish illustrations, is the result of thirty-five years of experience and accumulated knowledge. Rare document dealers and collectors, both novice and expert, as well as historians, librarians, and general readers will reach frequently for this essential book.”

Forging History: The Detection of Fake Letters and Documents

172 pages
Published by the University of Oklahoma Press, 1994
209 illustrations and extensive bibliography

“Focusing on three of the most skillful and notorious forgeries of modern times, Kenneth W. Rendell compellingly demonstrates that the authentication of historical documents and letters depends on analysis rather than intuition.

“Rendell begins by showing the reader paired examples of writing of historical figures (such as George Washington, Richard Wagner, and Charles Dickens) and then demonstrating which of each pair is genuine and which forged.

“Building the reader’s confidence in his method, Rendell then presents four extremely well-executed forgeries from the past, ostensibly written by Benjamin Franklin, Abraham Lincoln, George Washington, and Robert Burns, approaching each from a different technical viewpoint. When compared with genuine examples, however, their flaws are immediately apparent.

“The book culminates in an analysis of three major forgeries of recent times—the Hitler diaries, the Mormon letters, and the Jack the Ripper diary. Mixing technical details with anecdotes based on his own involvement in the investigation of each document, Rendell discusses the psychological reasons that the forgeries succeeded for as long as they did.”

Selected by the American Library Association as one of the Outstanding Reference books of its year, it was the most comprehensive book ever published on the subject up to that time, with chapters by leading authorities on all aspects of collecting. Sponsored by the Manuscript Society, of which Kenneth Rendell is a former President.

From top secret spy missions to recently declassified WWII documents, this richly illustrated account of the covert espionage operations of World War II takes readers behind the battle lines and into the undercover war effort.  Includes recently released never-before-seen photographs, coded messages, classified maps, and over 700 rare artifacts that shed light on the war’s darkest secrets.  Virtually all of the artifacts in this book are from the collection in The International Museum of World War II.  352 pages.

From the authors who created Eyewitness to World War II and numerous other best-selling illustrated reference books, this is the shocking story behind the covert activity that shaped the outcome of one of the world’s greatest conflicts—and the destiny of millions of people. National Geographic’s landmark book illuminates World War II as never before by taking you inside the secret lives of spies and spy masters; secret agents and secret armies; Enigma machines and code breakers; psychological warfare and black propaganda; secret weapons and secret battle strategies.

Six heavily illustrated narrative chapters reveal the truth behind the lies and deception that shaped the secret war; six pictorial essays showcase hundreds of rare photos and artifacts (many never before seen); more than 45 specially created sidebars tell the stories of spies and secret operations.

“Ken Rendell is the repository for the actual Holy Grail documents of World War II. … Amazing collection of artifacts you cannot see any place else in the world.”
– Tom Hanks

“World War II: Saving the Reality uniquely captures the experience of this monumental conflict. Along with compelling narrative and never-before-published photographs, you’ll hold replicas of nearly one hundred wartime artifacts: letters from the front, autographed portraits of commanding generals, urgent communiqués, Nazi propaganda, historic newspapers, Top Secret instructions, patriotic posters, and more. These pieces of history, from the archives of the famous Museum of World War II, are tucked and folded into envelopes and pockets within the massive, boxed collector’s book. Pulitzer Prize winning historian Doris Kearns Goodwin calls it remarkable and praises its emotional journey back in time. Phil Reed OBE, a director of the Imperial War Museum in London, says “Kenneth Rendell’s Museum of World War II simply has no equal. The museum can at last be widely enjoyed through this volume.” 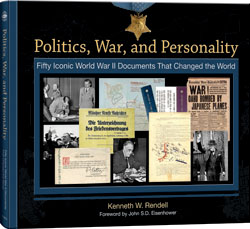 “This book, Politics, War, and Personality: Fifty Iconic World War II Documents That Changed the World, gives us a fleeting glimpse of the storehouse of historic items that are enshrined in that museum. Though it includes only 50 of some 8,000 documents and artifacts, it represents a sampling of what a visitor might see there. Therein, perhaps lies the book’s main purpose: a menu to tempt the person with a sense of history to make a pilgrimage to the Boston area to view the greatest collection of World War II items in the world.

Perusing the documents in books by Kenneth W. Rendell have, I think, restored much of my perspective. They have reminded me of how vast the war was, how much transpired in Russia, the Pacific, and the Far East. Much happened besides Operation Overlord, important thought it was. I know that Politics, War and Personality will do the same for others.

Ken Rendell, master collector, literary sleuth, and historian, has given us a book that I will long treasure and restudy. Thousands of others will do the same.” 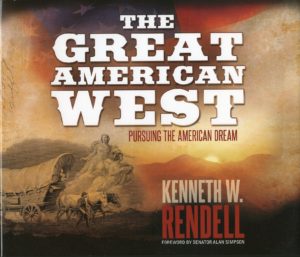 Kenneth Rendell’s fascination with the American West dates back to childhood in the late 1940’s, when movies and radio — and, eventually, television — abounded with Western stories.  “My vision of the West at that young age was highly romanticized, ” he says, “but that image didn’t last long.”

He’d soon read enough history to realize that the West of Roy Rogers, Gene Autry, and Hopalong Cassidy was a fantasy world with no connection to reality except the scenery.

“It wasn’t this fantasy world that captured and held my attention,” says the award-winning author. “It was the beauty of the landscape and, most important, the dream of freedom and opportunity that inspired me with a sense of adventure not unlike the spirit of the first pioneers. I never longed to be a cowboy or a gunfighter, but I did yearn to escape from my neighborhood to the wide-open spaces of the West, where a man could do whatever he could do. ”

In The Great American West:Pursuing the American Dream, Rendell serves up a combination of the engaging text and dramatic imagery that made his book World War II:Saving the Reality such a popular seller. Readers will see dozens of Western artifacts and relics, letters from famous outlaws, old newspaper clippings, historical maps and posters, and other rarities make the American West come alive — a once-in-a-lifetime experience to be shared with the whole family. 224 pages.

The Western Pursuit of the American Dream:
Selections from the Collection of Kenneth W. Rendell

358 pages
Published by the University of Oklahoma Press, 2004
500+ illustrations

“The collection is about seeing the world of pioneers through their eyes; the books they read that influenced them to go west; the letters they wrote at the time about their hopes, plans, and experiences; and the artifacts that represented their everyday activities as well as special events. No one can ever re-create the anxiety that people in the past have felt and few present-day historians seem to appreciate the importance of the sense of hope that the perceived opportunities in the West meant to real people at the time.”

“The Western Pursuit of the American Dream: Selections from the Collection of Kenneth W. Rendell…. succeeds in giving a sense of the struggle to tame the gorgeous wilderness that stretched beyond the tidy civilizations of the east…. It’s worth spending time with.”

“With more than five hundred color illustrations, this volume is a notable resource on the history of the West and a testimony to one man’s pursuit of an American dream.”

The rise of anti-Semitism in Germany is charted through this extraordinary collection of documents and objects from The International Museum of World War II, beginning with Hitler’s earliest known written antisemitic statement, penned onto an announcement of the terms of the Treaty of Versailles in June 1919, and concluding with his handwritten notes for his speech of 30 January 1939 in which he warned of the ‘annihilation of the Jewish race in Europe’ in the event of a second world war. Many of the papers and artifacts included in this catalog illustrate the nature of antisemitism before Hitler and his Nazi Party came to power in 1933. Taken together, they offer a disturbing insight into the prejudices and propaganda of the time, and the steps by which Jews were excluded from everyday life. 80 pages with 45 full color illustrations.

“This new – and path-breaking – understanding of the trajectory of anti-Semitism in Europe is without a doubt of tremendous historical significance.  The materials in The International Museum of World War II collection illustrate the ease with which propaganda can sink its roots in any society, and the dangers of underestimating its power.  The moral questions raised by the rise of the Nazis in Germany transcend geographical boundaries, falling squarely on the permanent agenda of institutions such as ours that look to the lessons of history as a way of provoking contemporary audiences to reflect on the roles and responsibilities of individuals, organizations, and nations when confronted with injustice.  The astonishing discoveries of The International Museum of World War II collection underscore the old adage about the importance of history: how it is impossible to understand who we are today without knowing from where we came.”  From the forward by Louise Mirrer, Ph.D., President, New-York Historical Society

With Weapons and Wits: Propaganda and Psychological Warfare in World War II

This is my first foray into writing about my World War II collection.

A compilation of the most noteworthy articles published by the Manuscript Society during its first twenty years. [Kenneth W. Rendell is a former President of the Society.]