French finance minister; confidential agent of Cardinal Mazarin; the last surintendant whose career ended with his conviction for embezzlement.

“Order is given to Mr. Nicolas, carpenter contractor of the Paris dams, to pay cash with the funds he was allocated for the year 1660, to Leonard Aubry, Antoine Vatel, Louis Masson, George Marchand, AndrÈ Bunet, Antoine CarrÈ and consors master paviors, the sum of six thousand six hundred fifteen livres, which is the amount for the works of new cobblestones, entrenchment, and removal of soil done by them on rue neuve des petits champs, starting at the cobblestone bank of rue de Richelieu to the cobblestone bank of Gaillon, in accordance with the council decree of December 4th, 1659, and in acceptance of work done by the master pavior in charge of the project and the dam inspector, in the presence of presidents and treasurers of France, the third of March of the present year, and returning this document, along with receipts of the named pavior contractors, together with the completion and acceptance of work done. The amount of six thousand six hundred fifteen livres will be passed and allocated without any difficulty to the carpenter contractor on his records. Done at the council of the King heldÖin Paris the fifteenth day of March sixteen hundred sixty one. For the funds mentioned in the decree.”

Nicolas Fouquet signs the present document six days after the death of the powerful Cardinal Mazarin (on March 9), of whom he was a supporter. He purchased the post of procureur gÈnÈral to the Parlement of Paris in 1650, and in 1653 he was appointed surintendant des finances. To aid Mazarin, who in return upheld him, Fouquet lent considerable sums to the treasury, making himself, in effect, banker to the King; his numerous financial operations, which he conducted in an irregular way (though not contrary to the usage of the times), made him extremely rich. After Mazarin’s death in March 1661, Jean-Baptiste Colbert, Mazarin’s personal intendant and closest confidant, sought to succeed Nicolas Fouquet as finance minister by destroying his reputation with the King. Colbert revealed irregularities in Fouquet’s accounts and denounced the financial operations by which he had enriched himself. Fouquet was arrested in September 1661, and his trial, which lasted three years, excited great public interest. Colbert suppressed the papers that would have proved Mazarin’s personal responsibility for many of the financial transactions in question, but Fouquet defended himself cleverly, and public opinion turned in his favor. On December 20, 1664, he was condemned to banishment, but Louis XIV commuted the sentence to life imprisonment. Fouquet was taken to the fortress of Pignerol, where he died just before a measure of clemency could be issued. Framed in celedon, ebony and antique gilt, with an early portrait engraving.

Upon the arrest of Nicolas Fouquet, Louis XIV hired the principal builders of Vaux-le-Vicomte — Le Vau, Le Brun and Le NÙtre — to work on Versailles. 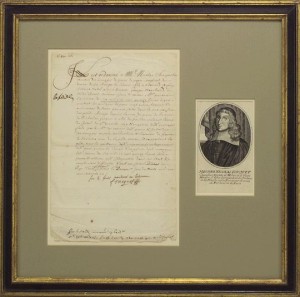