Signatures and Documents from the American Revolution

Opportunities for collecting autograph material of people who played important roles in the American Revolution are rare. The Revolution has been one of the most popularly collected areas by institutional collections, but there are still some opportunities. Any autograph or signed material of Thomas Paine is very rare; documents signed by Samuel Adams, one of the original firebrands of the early Revolutionary movement, as governor of Massachusetts can be found. Signed letters of Samuel Adams are rarely encountered. Patrick Henry, the articulate leader who set the tone of the Revolution with his “Give me Liberty or give me Death!” speech can also be found in signed documents as governor of Virginia. Paul Revere autograph material is very rare. Documents signed as governor of Massachusetts by John Hancock, perhaps the most famous of the Revolutionary personalities, are available. John Adams is very scarce in autograph material, despite his having been president. Benjamin Franklin, as governor of Pennsylvania, signed land grant documents, and their prices reflect the great interest in him from many different standpoints. The “financier of the Revolution,” Robert Morris, had reason to sign many financial documents, and is therefore available more frequently than many of his contemporaries. George Washington and Thomas Jefferson are both more frequently seen in signed documents as president, however, George Washington’s documents discharging soldiers from the Revolution are found.

Benedict Arnold left America for England and spent his last years there, and his autograph material is much scarcer than one might imagine. The Marquis de Lafayette was long-lived, and led a very active social, political, and business life after his return to France, and the availability of his signed letters reflect this. King George III had a relatively long reign and signed many documents, and his autograph signature is one of the most available from the American Revolution. 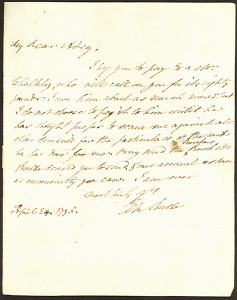 EDMUND BURKE. British orator and statesman. Autograph Letter Signed, Edm. Burke, one page, quarto, April 24, 1796. To Stephen Thurston Ady, Burke’s friend and banker. Thurston was a partner in the banking house of Boldero, Kendal & Co. Fine condition. “I beg you to pay to a Mr. Chalkley, who will call on you for … [ Read More ]

King of England. Letter Signed, three-quarters page, quarto, Queens House March 24, 1783. To My Lord. Fine condition. “As I shall be extremely glad to see You this morning as early as it may Suit You, I shall not detain You now by a long Epistle. After every sort of Chicanery from the Coalition, to … [ Read More ]

President of the Continental Congress; first Chief Justice of the United States; first Minister of Foreign Affairs; negotiated with Franklin and Adams the Treaty of Paris which ended the American Revolution; co-authored the Federalist Papers; negotiated the Jay Treaty of 1794; governor of New York. Autograph Manuscript, one and a half pages, legal folio, undated. … [ Read More ]

DAVID RITTENHOUSE. American astronomer; first director of the U.S. Mint; built observatory and a telescope, believed to be the first made in America, to observe the transit of Venus; during American Revolution served in the Pennsylvania Assembly and as President of the Council of Safety. Autograph Document Signed, one page, octavo, Philadelphia, February 13, 1781. … [ Read More ]