Collectible Autographs from the American West

America and, indeed, much of Western Europe, has always had a fascination with the autograph signatures, signed letters, and signed documents relating to the American frontier. This frontier, whether it was the Atlantic Coast faced by the earliest settlers, the Appalachian Mountains, the Rocky Mountains, or the Pacific coast, was unique – distinct from the frontiers of Europe, which were essentially boundaries separating densely populated countries. Not only is the American frontier the subject of cinema, television, and books, but also frontier architecture and decorative arts are found throughout the United States. The feelings of unlimited opportunities and expansiveness, with which many Americans are raised, can be directly related to the heritage of free land and the prospect of a new and better life on the frontier.

Daniel Boone represents this frontier sense in the popular imagination and in history. Fortunately, he was involved in many land transactions in his retired life and, although almost illiterate otherwise, was very capable of signing his autograph; while very rare, signed documents can be found by collectors. Anything with the autograph signature of Davy Crockett is very rare and hardly ever encountered. Also very rare is Kit Carson, who served as an Indian scout with the Army and signed documents in that capacity. The popular demand for Kit Carson's autograph signature has always been high. The colonizer of Texas, Stephen F. Austin, would be in the same category if it were not for documents that he signed pertaining to an early Texas loan; these are not common, but they can be found. Sam Houston, whose name is virtually synonymous with Texas, had a long political life, during which he signed many letters; his name was so boldly and clearly written that everyone knew who signed the letters, which were always treasured and saved. The Mormon prophet Joseph Smith, whose life was cut short, is very rare, while Brigham Young, with a long life span and a highly recognized signature, can be found in autograph signatures and signed letters without difficulty. George A. Custer, who had a relatively long military career during which he signed many documents, is very scarce, mainly because there has been a significant collector interest in him for many decades. Autograph signatures of Sitting Bull, Custer’s adversary, are very rare, and autograph signatures of Geronimo, extremely rare.

The famous outlaws and gunslingers of the West are generally unobtainable. Frank James, co-leader with his brother Jesse of the James Gang, wrote letters to his wife while awaiting trial in jail. At one time, these came onto the market and disappeared into private collections, but occasionally, one will be offered for sale. He signed these letters “Ben” so that, if intercepted, they would not be published. “Buffalo Bill” Cody, who had a legitimate career in the West, beginning as a Pony Express rider, created a “Wild West” show that brought the American West to the eastern United States, as well as to Europe. He signed autographs in person and wrote and signed many letters, so he is fairly available for collectors today. Autograph signatures of Annie Oakley, “Little Miss Sure Shot,” are much rarer than Cody’s, although she apparently would make herself available to sign autographs at the “Wild West” show.

CALIFORNIA GOLD RUSH “SUNDRY AMUSEMENTS IN THE MINES” Group of four illustrations on an oblong quarto sheet, entitled Sundry Amusements in the Mines. Lithographed and published by Britton & Rey, San Francisco. Each image measures 3 3/8 by 4 3/4 inches; the sheet measuring by 8 3/8 by10 3/4 inches. The first image, A … [ Read More ]

CALIFORNIA GOLD RUSH STOCK CERTIFICATE FOR THE TUOLUMNE COUNTY WATER COMPANY A stock certificate for the Tuolumne Country Water Company, 6 ¼ by 9 ¾ inches, Columbia, [California], September 26, 1862.  With a fine vignette of miners working a sluice and a cradle, typical of the California Gold Rush. The one-share certificate is signed by … [ Read More ] 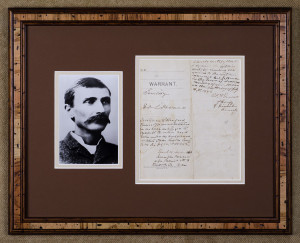 Frontier lawman; killed Billy the Kid. Arrest Warrant Signed, “Pat F Garrett / Sheriff of Lincoln County,” July 24, 1882, octavo. The warrant is for the arrest of Ed L. House who is accused of “willfully and maliciously” killing one Juan Chavis of Pino on July 20, 1882. The Warrant, written by Frank H. Sea, … [ Read More ] 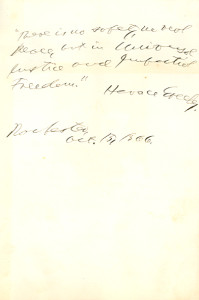 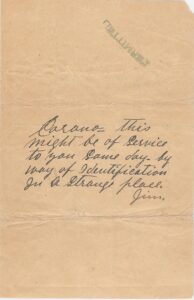 Western outlaw; together with his brothers committed numerous robberies and murders throughout the frontier. Autograph Note Signed, Jim, one page, octavo, Minnesota State Prison, [Oct. 1899], To Carano.  “This might be of service to you some day – by way of identification in a strange place.”  A fine example. Following the Civil War, Jim Younger … [ Read More ] 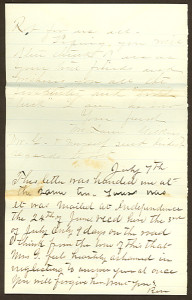 FRANK JAMES.  Desperado; robbed banks and trains together with his brother Jesse. Letter Signed, Ben, one half page, at the conclusion of a five and a half page letter from his friend, Mrs. Sam Gilkey written to Mr. and Mrs. James, octavo, Gallatin, Missouri, July 7, [1883]. To his wife, Annie James. With original envelope. … [ Read More ] 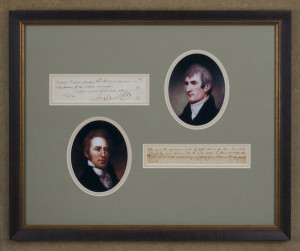 American explorers who led the Expedition (“Voyage of Discovery”) of 1804. A portion of an Autograph Letter written by Meriwether Lewis, Signed in the text, Capt Lewis, circa 1801, and an Autograph Document Signed by William Clark, 1815, framed together as an ensemble. During the late 1790’s Meriwether Lewis was in the Army and was … [ Read More ]

A VERY EARLY AND IMPORTANT EFFORT TO ATTRACT AND ENCOURAGE THE SETTLEMENT OF OREGON The American Society for Encouraging the Settlement of Oregon Territory. Document Signed, by the president and secretary of the Society, two pages, large oblong quarto, with the paper and wax seal of the Society.  The document is headed Oregon Settlement Stock, and bears … [ Read More ] 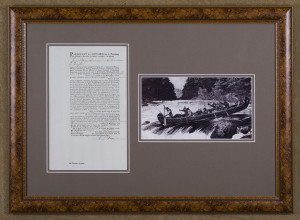 A Partly Printed Contract in which Louis Rocquebrune is engaged by the firm McTavish, McGillivray & Co. and their associates, John Ogilvy and Thomas Thain, “to make the journey both to and from Fort William on the River Kaministiguia; pass through Michilimakinac and go to the Rain Lake, if he is so required to do, … [ Read More ] 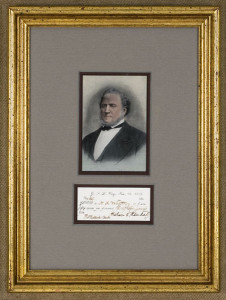