Autograph signatures, signed letters, and other signed pieces of artists vary in availability, and collector demand varies widely. The most popular area of interest among collectors is the French artists, beginning with early Impressionism in the 19th century and continuing well into the 20th century. Signed letters of Edouard Manet, the originator and leader of Impressionism, are, relative to other artists of the later period, much rarer and more in demand. Claude Monet was very well-known and signed many letters, but he is in great demand by collectors. More likely to be found are signed pieces by Auguste Rodin, the leading sculptor of realism. Pablo Picasso would give his autograph signature to admirers both through the mail and in person, but the international interest in Picasso has created a demand that has made his autograph signature difficult to find. The autographs of Henri Matisse, a leading fauvist painter and sculptor, are much rarer than the autograph material of his contemporaries. The Spanish surrealist Salvador Dali signed his autograph under many different circumstances but his popularity has caused him to not be as common as he might be.

In the field of American art, John James Audubon's autograph signatures and signed pieces are quite rare. The sculptor Augustus Saint-Gaudens less so, but his signed letters have been collected by an institutional library. John Singer Sargent, who wrote many signed letters of a social nature, has generally been available. The two American Western sculptors and painters, Frederic Remington and Charles M. Russell, are quite rare in autograph material, as is Albert Bierstadt. 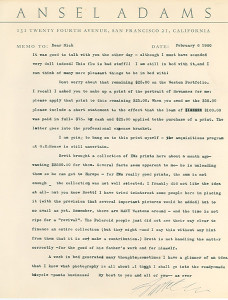 AMERICAN NATURE PHOTOGRAPHER ANSEL ADAMS.  Typewritten Letter Signed, one page, quarto, February 6, 1960. On his name imprinted stationery, to “Dear Nick.” “It was good to talk with you the other day – although I must have sounded very dull indeed! This flu is bad stuff!! I am still in bed with it, and I … [ Read More ] 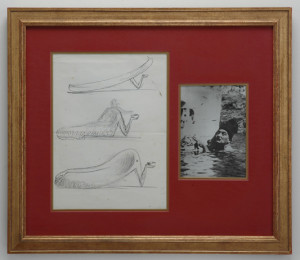 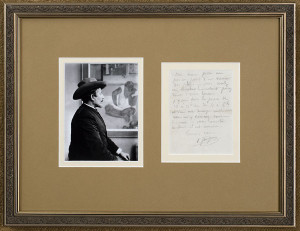 French painter. Autograph Letter Signed, one page, small octavo, n.d. In bold pencil to the painter Camille Pissarro. “Upon receiving your letter I set off for the Grande Athenes, hoping to meet you. Since I am busy tomorrow until Wednesday, I will not be able to make a date with you. Anyhow, I’m not in … [ Read More ] 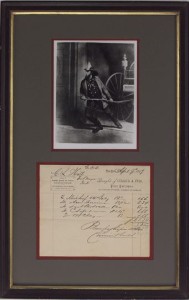 American lithographer. Currier & Ives. Autograph Document Signed by Ives as “Currier & Ives,” one page, quarto, April 9, 1859. Ives pens a bill for 16 of the firm’s lithographs, including “Am[erican]. Fireman” and “Mischief and 4th July.” Fine condition, framed in red, black and gilt, with a photograph of the lithograph “American Fireman.” Framed … [ Read More ] 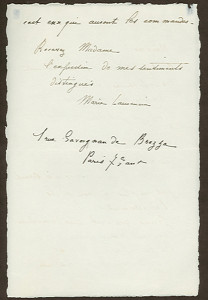 MARIE LAURENCIN.  French modernist painter. Autograph Letter Signed, one and a half pages, octavo, undated. To an unnamed lady, concerning her tapestry designs that the state manufacturer would surely reject, but when the tapestry again comes into vogue, she is certain they will be accepted. Price: $4,750 This item is associated with the following … [ Read More ] 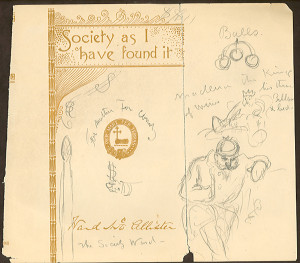 THOMAS NAST.  American cartoonist whose work was largely responsible for the overthrow of the Tweed Ring in New York. Fourteen sketches and Autograph Manuscript Signed, Th: N, drawn and written on both sides of a dust wrapper for Society as I have found it by Ward McAllister, 8 by 20 inches, [1892]. Minor marginal … [ Read More ] 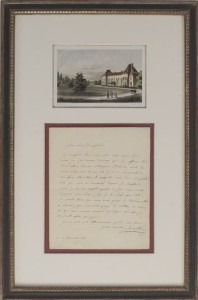 PIERRE-JOSEPH REDOUTE. French painter of flowers (sometimes called the “Raphael of Flowers”) and lithographer. Autograph Letter Signed, full page, quarto, December 10, 1811. To Aimé Bonpland, Josephine’s botanist, enclosing a bill that you have been asking me for so long a time, but I dont at all remember what you spent yourself because I didn’t … [ Read More ]