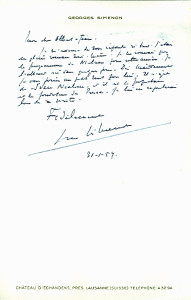 GEORGES SIMENON. French novelist; creator of the series of detective novels featuring Inspector Maigret. Autograph Letter Signed, one page, octavo, January 31, 1959. On his name imprinted stationery to Albert-Jean.  I apologize for being so late in replying to your letter. I was in the middle of working on my novel. I don’t know … [ Read More ] 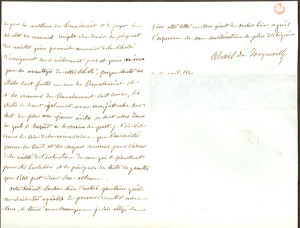 French author of Democracy in America. Alexis de Tocqueville. Autograph Letter Signed, two pages, quarto, April 17, 1841. “I received the last volume of the Academy of Caen as well as the yearbook of the Department of La Manche, which you announced to me by your letter of March 26. I cannot thank you too … [ Read More ]