In the field of science, collectors have generally collected autographs, signatures, signed letters, and signed documents of specific individuals, or those within a specific area of science, rather than the entire field. Science, like music and art, is an area of great international appeal, and collectors from many countries compete for autograph material of the same scientists. The earliest of the great scientists whose autograph material is possible to obtain is Isaac Newton. Signed documents by him are extremely rare. Even rarer, but possible to obtain, are documents signed by his great rival, Gottfried Wilhelm von Leibniz, who laid the foundation of integral and differential calculus. The founder of modern chemistry, Antoine Laurent Lavoisier, lived a relatively short life; it was quite literally cut short by the guillotine during the French Revolution's Reign of Terror. His signed documents are rare, but possible to obtain. Also in France at that time, the Montgolfier brothers, Joseph and Jacques, were pioneering with balloons, and in 1783 accomplished the first manned ascent. Signed letters by both are very rare.

In England, in the field of chemistry, Joseph Priestley, experimented with gases and discovered oxygen. His signed letters concerning religion are more common than those regarding science, but are rare nevertheless. Humphry Davy, who experimented with various gases, is rare but more commonly found. Early in the 19th century, experiments in electricity were taking place in many countries. In Italy, Alessandro Volta was making great progress toward understanding this new force; his autograph material is very rare, as is that of the Frenchman, André Ampère. Less rare are signed letters of the Englishman, Michael Faraday, who carried on important electrical experiments.

The giant of science in the 19th century was Charles Darwin, author of “The Origin of the Species,” published in 1859. His signed letters are rare, and those with interesting content, very rare. They have been aggressively collected by institutional libraries for decades, and his autograph signatures are very popular with collectors. The French chemists, Pierre and Marie Curie, are quite rare in any autograph form.

The outstanding figure of 20th-century science, Albert Einstein, was famous throughout his life and wrote a large number of signed letters, but those with interesting content have been collected by institutional libraries virtually since his lifetime. Einstein rarely gave his autograph signature, but he did on occasion, and signed letters of his with fairly routine content can be found.

Please browse our selection of science autographs, signatures and memorabilia or you may search our entire inventory alphabetically, by name or by category.

American mathematician. “The Theory of Recursive Unsolveability”. Typed dissertation accepted by Princeton in May 1950. 96 pps of text plus front matter, end notes, and bibliography. A carbon copy made along with the original typescript. Mathematical symbols not available on the typewriter were inserted by hand by Martin Davis.   Price: $1,250 This item is … [ Read More ] 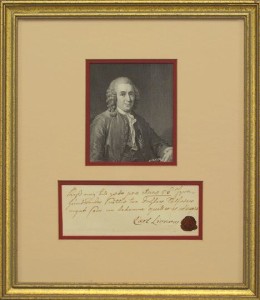 Swedish botanist; founder of modern systematic botany. Document Signed, Carl Linnaeus, with his red wax seal following, three full lines on a 3 1/4 by 8 inch sheet. In Swedish. As chair of botany at Uppsala University, Carolus Linnaeus certifies that “…for the year [17]56 I have received four hundred seventy-three dollars in silver coin … [ Read More ] 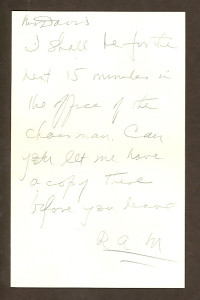 THE ORIGINAL MANUSCRIPT ON THE INVESTIGATION OF THE ORIGIN OF COSMIC RAYS ROBERT A. MILLIKAN.  American physicist. Typewritten and Autograph Manuscript, thirteen pages, quarto and octavo, undated. Comprising a quarto page of five typewritten lines, with the title and corrections in Robert Millikan’s hand; the first page of the paper (quarto), consisting of nine typewritten … [ Read More ]

RUSSIAN PHYSIOLOGIST; CONDUCTED FAMOUS EXPERIMENT DEMONSTRATING  CONDITIONED REFLEX IN DOGS. IVAN PAVLOV.   Inscribed copy of Ivan Pavlov’s 1909 lecture at the 12th Congress of Russian natural Scientists and Physicians in Moscow entitled “Natural Science and the Brain” in which he discusses animal adaptation to its external environment and conditioned reflex. Ivan Pavlov has written, in … [ Read More ]

DAVID RITTENHOUSE. American astronomer; first director of the U.S. Mint; built observatory and a telescope, believed to be the first made in America, to observe the transit of Venus; during American Revolution served in the Pennsylvania Assembly and as President of the Council of Safety. Autograph Document Signed, one page, octavo, Philadelphia, February 13, 1781. … [ Read More ]

WILHELM C. RONTGEN. German physicist; awarded first Nobel prize for physics in 1901 for his discovery of X-rays. Autograph Letter Signed, Dr. W.C. Röntgen, one page, Cadenabbia, March 30, 1909. In German. On his personally imprinted correspondence card to the Court Secretariat of his Royal Highness Prince Alfons of Bavaria. “Enclosed I am sending you … [ Read More ] 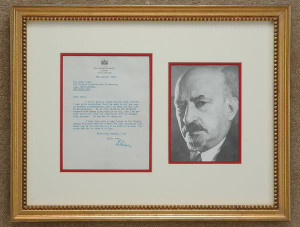 Polish-born Israeli chemist and politician who was the first President of Israel. Autograph Letter Signed, Chaim Weizmann, one page, octavo, August 4, 1940. On imprinted stationery of the Dorchester Hotel in London, to Dr. Josef Cohn at the Zionist Organization of American in New York City. “I would like to thank you for your reports. … [ Read More ]