This receipt was made out at the end of “the first important phase of [the elder] Thomas Chippendale’s career when he was a champion of the rococo taste in England. As far as he was concerned it had served him well and, through the publication of the Director, he had attracted to his premises a large and influential coterie of clients” [Anthony Coleridge, Chippendale Furniture].

Thomas Chippendale, Jr. was two months shy of his seventeenth birthday when he wrote this receipt. The oldest of seven boys and four girls, Thomas Jr. took over his father’s business after his death in 1779, and continued it as a partnership, which had begun in 1771 with Thomas Haig, until 1796. Haig was the clerk of James Rannie, Chippendale, Sr.’s first partner who died in March 1766.

Mr. Parran is most likely Benjamin Parran, who ranks among the important cabinet makers practicing in the Director style, but not publishing designs of their own. He was also among the many subscribers to Chippendaleís Gentleman and Cabinet-Makerís Director, which was first published in 1754, with a second edition meeting demands the following year, and a third in 1762. Parran succeeded his uncle, Benjamin Goodison, upon his death. Together with Benjamin Junior, he “carried on the business until 1783. Parran was supplying inexpensive furniture to the Crown from 1767 when a mahogany writing table with 3 drawers in the frame was delivered by him. That Benjamin Junior must, for a short period, have gone into partnership with Benjamin Parran is indicated by the fact that, in 1769, the Duke of Newcastle received an account for furniture of Messrs. Goodison & Parran. In 1783 Parran went into partnership with William Gates, until the following year when he formed a partnership with John Russell” [Coleridge]. 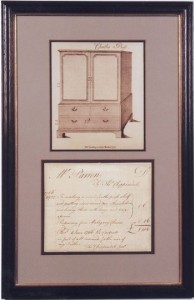