Virtually every able bodied man served in the military in World War II and many, like Kennedy, sought out combat and command experience. Despite a safe assignment in Florida Kennedy managed to get transferred to the South Pacific and a PT boat. After his PT-109 was cut in half by a Japanese destroyer, Kennedy heroically saved his men and with a message carved on a coconut arranged their rescue.

The young Kennedy running for president in 1960 contrasted with the grandfatherly Dwight Eisenhower who was personally immensely popular – after all, he “won” World War II. Kennedy’s sense of youth was reflected in his early presidency’s new ideas – the Peace Corps, a proposed Civil Rights Act and the space program. It was a new era with the reality of the Cuban missile crisis and then the reality of political assassination.
Our Large Collection of John F. Kennedy Autographs, Signed Letters

John F Kennedy’s signed letters are usually found when written as Senator with letters signed as President much scarcer. Kennedy’s autographs obtained while campaigning are the most available.

John F. Kennedy signed photos are highly sought after and not common. Nearly all are formal poses and represent how Kennedy saw himself – they are the image Kennedy chose to give an admirer.

Please browse our selection of John F. Kennedy autographed memorabilia or you may search our entire inventory alphabetically, by name, or by category. 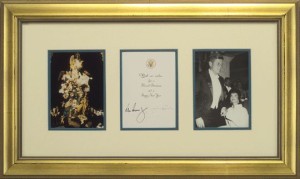 Price: $17,500 President and First Lady. Their Christmas card for 1963, signed by each, "John Kennedy Jacqueline Kennedy" beneath the ...
Read More