BROWNING, ELIZABETH BARRETT. A highly important photograph of her portrait painted in 1859 by Field Talfourd, now in the National Portrait Gallery in London, Signed by her on the mount below. Eleven inches by seven inches.

Elizabeth Barrett Browning never owned the original of this portrait and could only send photographs of it, which she did to her sister Henrietta and brother Charles John, both inscribed to them. The original was commissioned by and remained in the possession of Miss Ellen Heaton until she presented it to the National Portrait Gallery in 1871. Other than those to her brother and sister, Elizabeth Barrett Browning is known only to have signed two others: the present example and one now in the Armstrong Browning Library. Both of these can be presumed to have been in her own personal possession and doubtless were among those she received in 1859.

In a letter of 4 March 1859, Elizabeth wrote to her sister about the photograph of the portrait: “A photograph from Mr Talfourd’s portrait of me (which has been greatly admired and considered very like by the Roman world) will be sent to you by an early opportunity. It is too flattering – much idealized, in fact – but there must be a good deal of likeness, or it would not strike so universally. As a work of art, it is certainly most beautiful.” 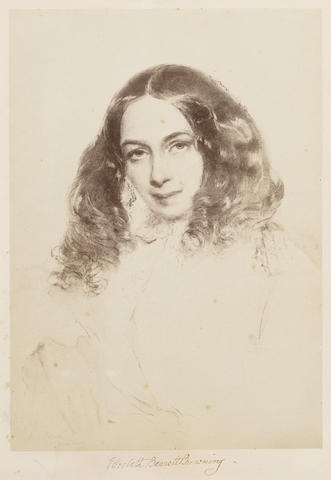