Autograph Musical Quotation Signed, one page, on a 3 by 8 inch sheet, undated. Noel Coward writes seven measures of his song, “I’ll Follow My Secret Heart,” with words to the refrain, “I’ll follow my secret heart my whole life through.” Inscribed to Lionel Aucoin.

Noel Coward’s song, “I’ll Follow My Secret Heart,” is from his operetta, Conversation Piece, which he wrote in 1934. In this tale of upper class romance in Regency England, Coward himself co-starred with the French soprano, Yvonne Printemps, who introduced the song, “I’ll Follow My Secret Heart.” Coward wrote the role of Melanie for Printemps, who spoke no English and had to learn her part phonetically. (Since she played a French girl, she was able to slip into French when she got lost.) Her singing of “I’ll Follow My Secret Heart” was the highlight of the show. When Coward left the run, her new leading man was the young and handsome French film star, Pierre Frenay, Printemps fell in love with Fresnay and spent the rest of her life with him, although they never married. In 1935, Conversation Piece was premiËred in the United States, where it played for a twelve-week limited engagement on Broadway. The critics were enthusiastic about Printemps, but less so about the work.

Matted in yellow and teal with a 3/4 photograph of Noel Coward in a suit , holding a cigarette. Framed in antiqued gilt, measuring 16 inches wide by 17 inches high. 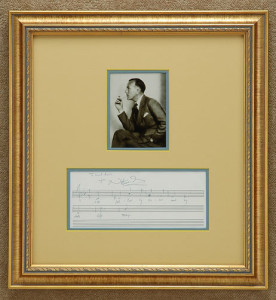