“You are in good health and moreover you are a reasonable woman; and I therefore select you as the person to whom I ought to announce a very terrible event of which I heard yesterday evening. You must summon to your aid all your fortitude and your sense of religion; as you must be aware that you have not only to bear this misfortune yourself; but by your exhortations and example to induce others to bear it of whom one is ill and the other but little accustomed to govern her first impulses in anything. You are aware that your uncle General Harper has long been afflicted by a disorder in the circulation near his heart called an ossification of one of the vessels. It appears that he was sitting at breakfast lately with his family and got up to talk over with his son some arrangement connected with the marriage of the latter, when he suddenly dropped down dead. the person from whom I had the intelligence was Mr. Rush who dined with me yesterday. He had received the account direct at the end of last week. He had no doubt of the fact. I had the pleasure of being acquainted with General Harper; and for his sake, for that of his family and for yours and your dear sisters I cannot express to you what pain this event has given me….” 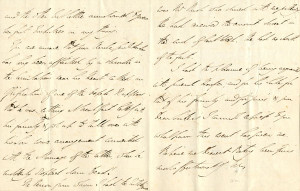