THE ONLY KNOWN MANUSCRIPT, RETAINED BY LOEWE HIMSELF, OF THIS FAMOUS AND POPULAR SONG FROM CAMELOT.

Autograph Musical Manuscript of one of his most famous songs from Camelot, “Fie On Goodness,” three and one-quarter pages, large quarto, [1959].

Frederick Loewe writes thirty-nine lines of music and lyrics to the song, “Fie on Goodness.” It is the early draft of the melody and words from his personal archive, written during the creation of this remarkable classic musical. This song, in Act II, is the nastiest of the comedy numbers-the knights are restless and the erosion of the ideals of the Round Table is becoming evident. Now that the knights, who are supposedly keepers of right and goodness, call “goodness” bad, there is a sense that Camelot will fall. The lyrics are as follows: “Fie on Goodness, fie! Fie on goodness, fie! Eight years of good sense to your neighbor, making sure that the meek are treated well! Eight years of philantropic labor! Derry down dell! Gad, but it’s hell! Oh, fie on goodness, fie! Fie! Fie! Fie! Scotland! Ah, my heart. Fie on Scotland, Fie! No one repents for any sin now. Fie! There’s not a folly to deplore. Derry damn! Oh”

Camelot, based on the Arthurian legend and T. H. White’s The Once and Future King, opened on Broadway in New York on December 3, 1960 and had a run of 873 performances over two years. Production was staged by Moss Hart, with Richard Burton, Julie Andrews, and Robert Goulet in the leading roles (Arthur, Guenevere, and Lancelot). Written in collaboration with Alan Jay Lerner, the musical symbolized to many Americans an ideal society during the presidency of John F. Kennedy. In fact, its admirers included President and Mrs. Kennedy, whose White House circle was often likened to Camelot. It is not an exaggeration to say that Lerner and Loewe perfected the musical-theater art form in America, and produced some of the best-loved musicals of the twentieth century. The two met by chance in 1942 and began their remarkable collaboration, which “after several unsuccessful attemptscreatedmusicals that have been performed throughout the world, revived and filmed” [The New Grove Dictionary of Music and Musicians]. A film version of Camelot was released in 1967. 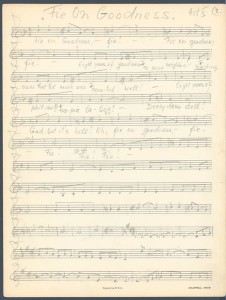