Rudolph (with his shiny nose) was born in 1939 thanks to a department store looking for a promotional gimmick at Christmas time and a copywriter who had been teased and taunted as a kid. The department store, Montgomery Ward (the Chicago-based chain) assigned one of their copywriters, Robert L. May, the task of coming up with a Christmas story they could give away to shoppers.

May drew on his childhood; he had often been taunted for being shy, small and slight. He came up with the idea of an underdog/deer who was ostracized by the reindeer community because of his physical abnormality — a glowing red nose. Corporate executives didn’t exactly have a story like this in mind when they turned to May for something cute but after some hesitation approved it. The first year, almost two and a half million copies of the booklet were distributed. By the end of 1946, taking into account wartime paper shortages which curtailed printing for a few years, more than six million copies had been given out.

While May was Rudolph’s creator, the copyright was held by Montgomery Ward; May received no royalties. Deeply in debt from his wife’s medical bills, he appealed to the President of Montgomery Ward. Eventually, copyright in hand, he had the story commercially printed and a nine-minute cartoon made for motion picture theaters.

Still, Rudolph was not yet the phenomenon he would become. That happened in 1949 when May asked his brother-in-law, the songwriter Johnny Marks, to compose a melody and write the lyrics to a song based on his character and story. Marks’ song, while catchy, was rejected from North Pole to South Pole by nearly every performer they approached — except for Gene Autry. On June 27, 1949, Autry recorded it and introduced it in Madison Square Garden. That year, two million copies were sold. “Rudolph the Red-Nosed Reindeer” went on to become one of the best-selling songs of all time, second only to “White Christmas”.  A television special was produced with Burl Ives in 1964, the the longest-running special in television history.

Marks, who brought Rudolph to song, attended Columbia University, studied music in Paris, and became a radio producer who provided entertainment for American troops stationed overseas during the war. Four of his Yuletide hits became award-winning classics. In addition to “Rudolph,” they are “I Heard the Bells on Christmas Day” (first recorded by Bing Crosby), “Rockin’ Around the Christmas Tree” (a hit for Brenda Lee) and “A Holly Jolly Christmas” (recorded by The Quinto Sisters, then Burl Ives). Marks was voted into the Songwriters Hall of Fame in 1972 and the Grammy Hall of fame in 1985 (for the Columbia Records’ Gene Autry recording of “Rudolph”).

Framed (with an image of Rudolph from a copy of the original book by Robert L. May), in a decorative silver frame, with blue outer and cream inner mats) dimensions: 16 inches wide by 20 inches high. 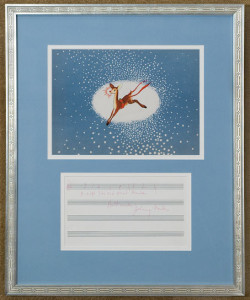