Document Signed, by Cardinal St. Praxedis, Antonio Ciocchi del Monte, one page, oblong folio, 330 by 470 mm. [13 by 18 inches], [ca. 1528]. On vellum. Two vertical folds damp-stained in the upper portion, affecting the illuminated border and two letters of the heading; some rubbing of the painted surfaces, otherwise in fine condition.

This document is an ecclesiastical indulgence granting, among other things, the privilege of a secular confessor to the nobles Theseus and Guido de Sesso. All privileges are granted except where forbidden by the famous papal bull entitled In cena Domini. The top inside borders of the document are decorated with foliage and stylized flowers, in red, blue, pink, green, white, and black with slight gold illumination. A bearded head of Christ, encompassed by a cross nimbus, is set in the middle of the top margin, above the introductory line BEATISSIME PATER.

Antonio Ciocchi del Monte was born in the latter half of the fifteenth century. His father, Fabiano, was a distinguished advocate of the town in Monte San Savino, from whence the family derived its name. Entering the Catholic Church, Antonio became Auditor of the Rota and then Archbishop of Siponto [Manfredonia]. In 1504, Antonio’s brother, Vincenzo, died and his son, Giovan Maria, was adopted by Antonio, who acquired the post of papal chamberlain for the young man. When Pope Julius II created Antonio a cardinal [March 10, 1511], the latter resigned his archbishopric in favor of his nephew. Cardinal del Monte was greatly favored by the successors of Julius II, but was especially close to Adrian VI. After Adrian’s death in 1523, an attempt was made to have del Monte succeed him; the attempt was unsuccessful. but he was made papal legate at Rome by the new Pope Clement VII. He died in September, 1533, leaving his nephew, Giovan Maria, to fulfill the family ambitions by being elected Pope Julius III [1550-1555].

Matted in cream and light brown, in an ornate antiqued gilt frame. Framed dimensions are 26 1/2 inches wide by 21 1/2 inches high. 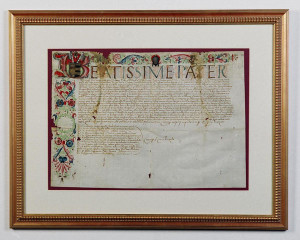