Robert Frost’s autographs, signatures and signed letters are more available for admirers and collectors than might be imagined considering his continued popularity among today’s readers of literature in general – not just poetry. Frost introduced poetry to many generations and during his long life was very responsive to admirers and fans of his poetry seeking his autograph. Also contributing to Robert Frost’s autograph and signature being collectible today is his fame throughout his life and the clarity of his signature. The latter meant that everyone could instantly recognize Frost’s autograph and signature and the former ensured that the people recognized the importance of saving his writing.

Robert Frost’s signed letters are much scarcer than his signatures or signed books. In part this is because his letters have been collected by institutional libraries and specialized private collectors during, and since, his lifetime. Letters signed by Frost infrequently are on the market, but there are opportunities to acquire one.

Frost’s autograph fair copies are surprisingly obtainable. Frost would write out his poems for friends and these were treasured and saved. While obtainable, these are not common, nor inexpensive. They are a wonderful connection with the poet who memorably appeared at John F. Kennedy’s inauguration and whose poems are still part of America’s educational experience. They are real treasures and when a person finds a handwritten example of a favorite poem it is a magical experience.

Robert Frost signed books for individual collectors and also signed books as part of limited editions by his publishers. These are generally available [depending on the specific book and its edition]. Frost signed photographs are scarcer than his autographs and signatures and much less frequently encountered. Frost did not have a supply of photos to sign for admirers and fans, so unless someone brought one to him, he didn’t provide them.

Please browse our selection of Robert Frost autographed memorabilia or you may search our entire inventory alphabetically, by name, or by category. 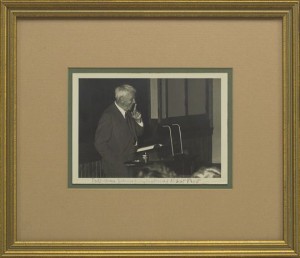 American poet. Signed Photograph. Frost is shown standing up before a podium, reading from a book. He is wearing a ...
Read More