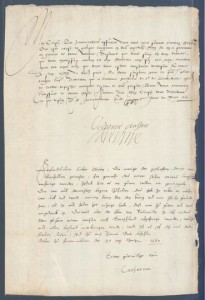 CATHERINE DE MEDICIS. Queen of France; wife of Henry II. Letter Signed, one page, legal folio, Fontainbleau, March 30, 1560. In German. To her cousin. The Queen says she has had to neglect her cousin’s affairs, but that he should realize that both she and the King value him as an ally. Her representative, Herr … [ Read More ]