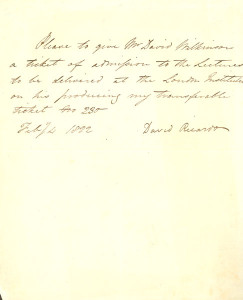 Price: $17,500 British economist considered one of the most influential of the Classical Economists whose contributions dominated economic thinking throughout the 19th century. Autograph Letter Signed, one page, quarto, February 24, 1822. “Please to give Mr. David Wilkinson a ticket of admission to the Lectures to be delivered at the London Institution on his producing … [ Read More ]