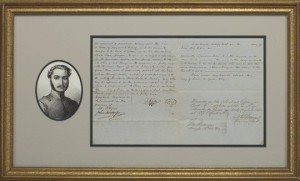 Pioneer in California; founded colony on site of what is now Sacramento; gold was discovered on his property (1848), after which he became bankrupt, as his workmen deserted him, his sheep and cattle were stolen, and his land occupied by squatters. Document Signed, J.A. Sutter, three pages, quarto, June 1849. Sutter grants Archibald C. Peachy … [ Read More ]