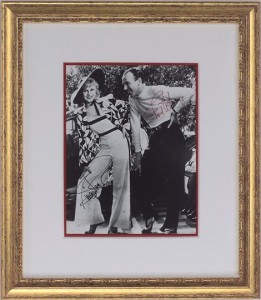 Price: $950 Legendary Hollywood dance team. Full-length Photograph of the duo, each posing with their right hand on their right knee and their left hand on their left hip, Signed by each in the light portion of their corresponding image. Astaire’s signature appears in red ink. The black and white photograph measures 8 inches wide … [ Read More ] 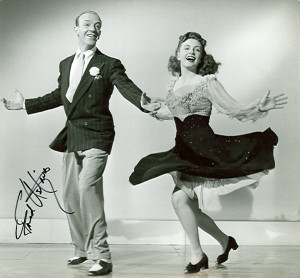 LEGENDARY HOLLYWOOD DANCER  Full-length Photograph of Fred Astaire and co-star Joan Leslie, wearing formal attire and dancing in their 1943 RKO film The Sky’s The Limit, Signed by Fred Astaire in the light portion to the left of his image. The black and white photograph measures 8 inches wide by 7 inches high. Price: … [ Read More ]

AMERICAN FILM ACTOR STARRED IN  “THE PUBLIC ENEMY AND YANKEE DOODLE DANDY” Typewritten Letter Signed, Jim, one page, quarto, April 17, 1974. On his name imprinted stationery, Beverly Hills, California, to Ann Ford in Huntington, Massachusetts. “I assume by this time you are happily ensconced at The Wrens. It would be just the right … [ Read More ]

Price: $6,750 “…THE BIGGEST SMASH HIT IN NEW YORK.” English actor, playwright, and composer best known for highly polished comedies of manners. Typewritten Letter Signed, May 21, 1958, octavo, on stationary with the address 404 East 55th Street, New York. To “My dear Bink” (Hugh Beaumont). “Thanks ever so for your letter. “Yes, I am … [ Read More ]

AMERICAN MOTION PICTURE ACTRESS Typewritten Letter Signed, one page, quarto, April 23, 1955.  On her address-imprinted stationary, to Sally and Bob Roberts in Forest Hills, New York.  With the original envelope. “Thank you so much for your lovely birthday card.  I am so deeply grateful to each of you for remembering.  “I did enjoy … [ Read More ]

Price: $7,500 American novelist Document Signed, two and a half pages, legal folio, April 9, 1936. An agreement between Faulkner and RKO Studios, Inc. in which RKO engages William Faulkner “…to write, compose, prepare and/or revise a treatment and/or adaptation and/or continuity, with dialogue, of a story presently entitled ‘Gungha Din,’ suitable for reproduction as … [ Read More ] 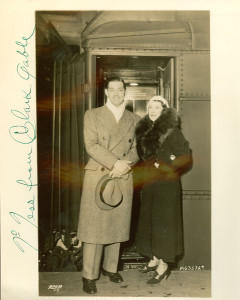 Price: $6,000 American composer of Broadway musicals. “Show Boat.” Autograph Musical Quotation Signed Jerome Kern and inscribed ”To my young friend Bill Fowler with every good wish from his sincerely Jerome Kern.” December 1939. Kern has penned two measures of the song Why do I Love You from the musical Show Boat, on the title page … [ Read More ] 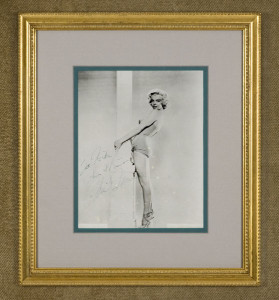 Price: $15,000 Hollywood movie legend. “…LOVE AND KISSES….” Full-length photograph of the alluring Marilyn Monroe wearing a swimsuit and espadrilles, Signed and Inscribed in the light portion “To Mike Love and Kisses Marilyn Monroe.” The black and white photograph measures 8 inches wide by 10 inches high. Before she was an actress, before she was … [ Read More ] 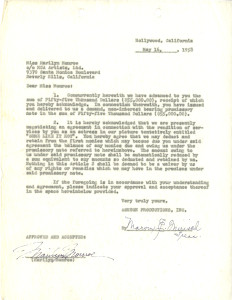 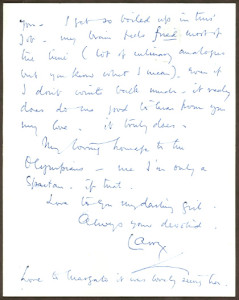 Price: $750 British actor. Autograph Letter Signed, Larry, four full pages, octavo, Brighton, “Mon. 5th or 4th or something Sept.,” n.y. To “Darling Angel Girl,” [Madeline Sherwood, wife of screenwriter Robert Sherwood]. “How lovely to hear from you, and thank you my darling for such an angelic letter. It was so sweet of you to … [ Read More ]

Price: $7,500 Composer and librettist of film and Broadway musicals. Mimeograph Document Signed in ink, 52 pages, quarto, May 4, 1940. The agreement between Rodgers and Hart and RKO Radio Pictures for exclusive motion picture rights to the musical comedy Too Many Girls. The agreement contains clauses regarding advertising, musical recording rights and distribution rights. … [ Read More ]