A Winston Churchill autograph is the overwhelming favorite gift for men celebrating their 60th birthday. Churchill is for many a source of inspiration for the ultimate “come-back” story in his later years. He overcame a decade of criticism and at the age of sixty-five took over the helm of the English government at a time when it was about to be conquered by Germany, and, in a very real sense, through the power of his personality alone inspired his nation to heroic feats unparalleled in modern history.

The Power of a Winston Churchill Signature and Signed Letters Churchill, perhaps more than others, gives the collector an intimate view through the camera into one of the great personalities of modern time. Some were taken in casual settings as in the library – his favorite room in the Villa la Pausa, and another on the outdoor terrace. We also have formal photographs with Churchill’s autograph and other photos framed alongside a Churchill signature or signed letter.

Please browse our selection of Winston Churchill autographs – his signature on photographs and on signed letters for sale below, or you may search our entire inventory alphabetically, by name, or by category. 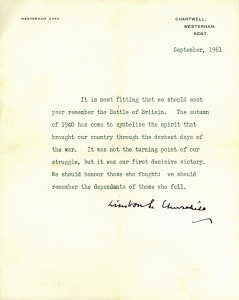 Prime Minister of England. THE BATTLE OF BRITAIN "THE AUTUMN OF 1940 HAS COME TO SYMBOLIZE THE SPIRIT THAT BROUGHT ...
Read More 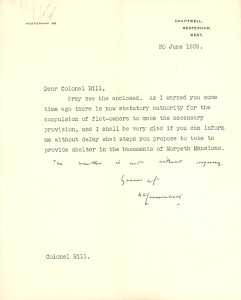 Prime Minister of England. IN JUNE 1939 CHURCHILL WANTS TO KNOW ABOUT BOMB SHELTERS IN HIS BUILDING "THE MATTER IS ...
Read More